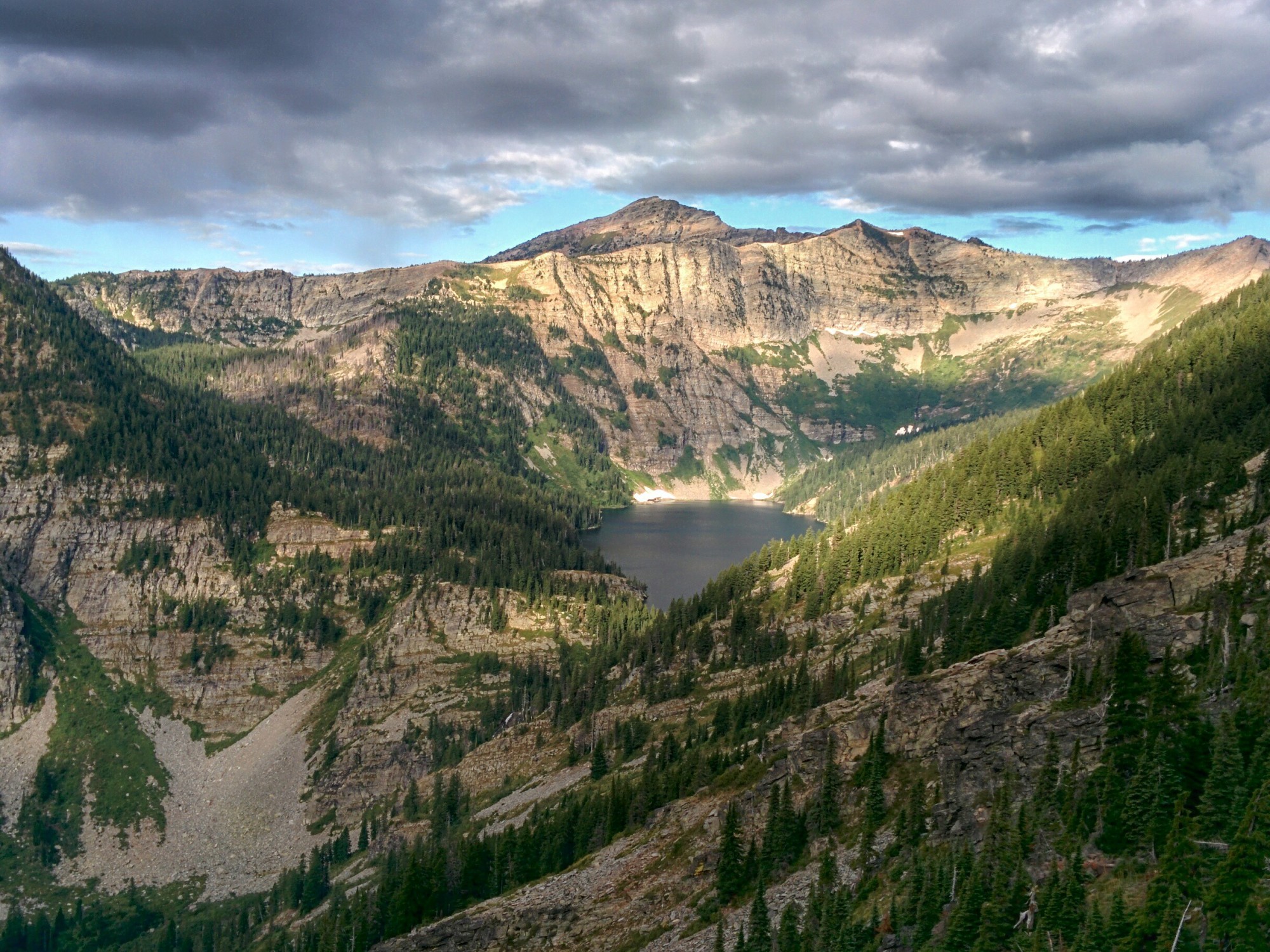 It’s been a couple of very wet weeks up here in Idaho and although the forecast called for more of it this last weekend, I was anxious to get out. Justin and I made plans to once again visit the Cabinet Mountains Wilderness in Montana to explore a feature called Lost Buck Pass and so we set out Friday morning.

Lost Buck Pass sits above the Geiger Lakes in the South East section of the wilderness. Rain clouds continually came and went, however we began the hike with hopes of clear skies. The trail enters the wilderness and immediately passes the lower Geiger Lake at around 1.5 miles. This easy to access area gets a large amount of use and it was disappointing to see a couple dozen names carved into the wilderness sign. Another 1.5 miles further brings you to the upper Geiger Lake where we set up camp. Clouds loomed just above the lake, blocking the view of the surrounding peaks and the pass.

The next morning, it had stopped raining and the clouds had lifted from the pass. Temperatures were chilly and although the skies looked dark in every direction, they were broken up by fragments of sunshine. Climbing toward the pass, our legs and feet quickly became drenched from the rain-soaked brush along the trail. When we reached the pass, the wind was howling but the views were incredible. From the pass, one can see Wanless Lake West across the valley, towering above the much smaller Buck Lake. Despite the wind and threatening clouds, we followed the trail South from the pass for a couple miles. This trail follows the ridgeline and provided great views with plenty of huckleberries. When it looked like the storms in the distance might head our way, we decided to get down from the high-exposure to the safety of our forested-campsite. That evening, the skies looked much nicer so we decided to hike the 1.5 miles back up to the pass to watch the sunset.

Sunday morning, the skies were clear but temperatures were still low. After packing up camp, we spent some time exploring the lower lake in the beautiful morning light. Even though we had a great time, this was not the wilderness experience I was hoping for. Certainly the scenery was spectacular despite the weather, but the presence of people took away from the solitude. In all, we saw probably 20 other people in groups ranging from noisy-older women to younger guys with excessive firepower. As I said before, this area is easy to access and seems to attract the rowdy locals. I still highly recommend the scenery, but don’t expect to be alone.

My name is Cody and I have an immense passion for natural landscapes. I enjoy spending my free time backpacking, camping, fishing, and mountaineering.

It is my hope that sharing my adventures introduces others to scenic wild places they may or may not ever visit and that they may enjoy them and be inspired to have responsible land ethic values.

“…the idea of a land ethic is simply caring: about people, about land, and about strengthening the relationships between them.” -The Aldo Leopold Foundation